Casper’s Deli and Bakery (CDB) was founded in 1953 by Drake Tap. Drake founded the initial bakery on the property that now houses the main manufacturing facility and delivery/shipping warehouse. Drake’s initial annual sales were $5,000 but today the business has grown into a significant bakery with four separate retail locations and a daily distribution business. Drake retired in 1980 and the business is now run by his son, Eddie.

CDB has always been a family-owned, private business. Two years ago, CDB took on an external inves-tor in order to investor some significant renovations to some of the bakeries. This investor now owns 25% of CBD. While the investor is not involved in the day-to-day operations, he is concerned about the profitability of CDB and ensuring he gets a return on his investment. In addition, CDB has a loan with the local bank. CDB is considered low risk by the bank and the loan has CDB’s equipment as collateral in case of default.

With Eddie seeking to expand, the 2017 fiscal year has seen significant accounting activity. The work- load ultimately ended up being too much for the controller, who resigned in September. The new controller was hired in November and has been asked to deal with the appropriate accounting treatment for the activi- ties that took place. Exhibits I and II detail the information for the year.

CDB has new auditors this year; however, it has received an unmodified opinion every year by its previ-ous auditors and Eddie and CDB have always been receptive to any auditor recommendations.

a).  Complete the following if your elective is assurance.

It is now December 15, 2017. You work for the new auditors of CBD. You have been put in charge of the CDB audit, having just recently obtained your CPA designation. Your audit partner has pro- vided you with the information in Exhibits I and II and has asked you to prepare a detailed planning memo in anticipation of this year’s upcoming audit. You can assume that your engagement partner has already conducted annual checks for independence and has the ability to conduct the audit. You can also assume that the engagement letter has already been prepared and signed.

Based on the information provided, complete your planning memo. Ensure that you include in your memo your assessment of inherent risk, control risk, and detection risk; a preliminary assessment of materiality with support; and an analysis of any areas that you believe need to be focused on, in-cluding key substantive audit procedures that you would carry out based upon your analysis, along with the related assertions and control tests that you would conduct. Also include as a separate part of your memo the potential weaknesses that need to be discussed with Eddie, along with recom-mendations to strengthen those areas.

Complete the following if your elective is accounting.

It is now December 28, 2017. You are the new CDB controller. You have been left sifting through the activities that have taken place throughout the year. Eddie has asked you to prepare a report to him that identifies the key accounting reporting and presentation issues along with recommendations. The new auditors have already been approved and Eddie has had a preliminary meeting with the partner to get them up to date on the issues for the year. Eddie expects the auditors to be focused on these key activities so he wants to make sure that any decision CDB makes is well supported but also meets his needs as well as the needs of other investors and creditors.

Exhibits I and II provide information on CDB’s activities for the year and an overview of its opera-tions and 2017 sales. You have been asked to ensure you recommend proper recording and presen-tation of any accounting issues. Prepare the report for Eddie.

ACC 1304, complete the assignment assuming your elective is accounting. Justify your answers

CDB has a main warehouse hat bakes all goods and ships these goods out to its retail stores a mini-mum of three times per day. Baked goods include breads, buns, cookies, pastries, and bagels. In ad-dition to baking for the retail locations, CDB also has significant sales to wholesale customers such as restaurants. Sales in 2016 to restaurants amounted to $5 million; unaudited 2017 sales to date to restaurants are recorded at $6.5 million. All sales to restaurants take place from the main warehouse. Exhibit II highlights the CDB network along with unaudited sales to November 30, 2017, from each of its four retail locations and a separate division that manufactures candies.

Cost of goods sold typically averages 60% of sales. This year Eddie has informed you that prelimi-nary figures show that cost of goods sold is closer to 53%. He stated that he is exceptionally happy with this number, although he is not quite sure why it is lower.

Net income has historically been 20% of gross profit.

CDB supplies buns and breads to a significant number of restaurants in the surrounding area. Restaurants are invoiced monthly. Year-end receivables in 2016 were $280,000. Receivables as of November 30, 2017, are $540,000.

Most inventory consists of the raw baking materials needed to produce the baked goods and these are usually kept at the warehouse. Inventory for year ended 2016 was $320,000. Current inventory is $460,000.

CDB has always completed inventory counts at year end with no discrepancies.

In August 2017, CDB opened up a fourth location on Franke Street. The land was purchased on January 2, 2017, for $180,000. There was an old house on the land that was demolished at a cost of $25,000. The new building cost $620,000 to build and is expected to last 25 years. It includes a 110-square-metre (1,200-square-foot) storage area where raw baking materials that are non-perish- able can be stored. This has allowed CDB to purchase larger quantities of some items at a volume discount.

Eddie’s wife owns a restaurant of which Eddie holds 30% of the voting shares. CDB is the sole sup- plier of bread and buns to the restaurant.

CDB recently entered into a service contract for a well-known chain of restaurants. Terms of the contract call for daily deliveries to 20 different restaurants within a 50-km radius of CDB’s ware-house. The contract has performance guarantees and penalties if CDB does not deliver on time or a quality product. The contract began in October 2017 and included an upfront payment of $150,000.

In anticipation of the new retail location, CDB’s previous controller decided to implement a new computer system linking the four locations to the central warehouse and main finance and admin-istration department. The new computer system was installed and activated on August 1, 2017. It required a manual inputting of all of the trial balance numbers as of July 31.

The balance of the employees are paid an annual salary that is approved by Eddie at the beginning of each year.

The general accountant receives the payments from the customers and enters them into the system daily. They prepare the bank deposit slip and ensure that all monies and cheques are deposited into the bank account daily. Each month, they prepare the bank reconciliation and submit it to the con-troller, who then signs it for review and files it.

With all the expenses being incurred for the new retail location, Eddie decided that there needed to be a stronger review of finances. In anticipation of this, he implemented a new policy for January 1, 2017, whereby all expenses greater than $5,000 need to be signed and approved by him first.

CDB did have some accounting errors in the past that were found by its auditors. It has always cor-rected any errors brought to its attention.

As part of its stimulus package, the Canadian federal government announced a special grant to companies that were investing in new manufacturing initiatives. During the past two years, CDB had been developing a bread pan that was capable of cooking bread without overcooking or burning it. The research started in 2015, with those costs being expensed as incurred. In 2016, CDB incurred $500,000 in development costs that were appropriately capitalized on the 2016 year-end financial statements. In June 2017, CDB received $650,000 from the federal government as a grant for half the cost of the manufacturing equipment necessary to make the new bread pans. The equipment was installed and was operational as of July 1, 2017. Manufacturing of the bread pans began during July and the pans were sold beginning in September. You have no other details on sales projections but you were told that the equipment is expected to have a useful life of five years. The grant was recorded as revenue when received.

CDB was delivered a lawsuit notice as a result of a cake catering disaster that happened in Septem- ber 2017. A cake contract worth $50,000 to CDB was incorrectly ordered and managed by one of the cake contract managers. Instead of producing and delivering 500 specialty dog cakes for an interna- tional dog show competition, CDB mistakenly produced and decorated 10,000 specialty cat cakes instead. While CDB refunded the event organizers the $50,000, the organizers have also sued CDB for $400,000 for breach of contract due to the embarrassment that resulted with the media coverage. The preliminary assessment by CDB’s lawyers suggests that there is a 10% chance that CDB will not be found liable, a 50% chance that it will be found liable for $100,000, and a 40% chance that it will be found liable for $300,000.

CDB also has a division that manufactures and sells seasonal candies. The candy division has had difficulty this year due in part to reduced consumer candy consumption for health reasons. The profits of this division are down 30% from last year. Currently candy inventory is 50% above the level of the previous year. The candy inventory accounts for 10% of CDB inventory. There was a note from the sales manager that said that the excess candy inventory could be crushed into powder and sold to fancy coffee shops that make seasonal hot drinks. This by-product would add 10% to the cost of the inventory and could be sold at about 75% of the regular candy price. 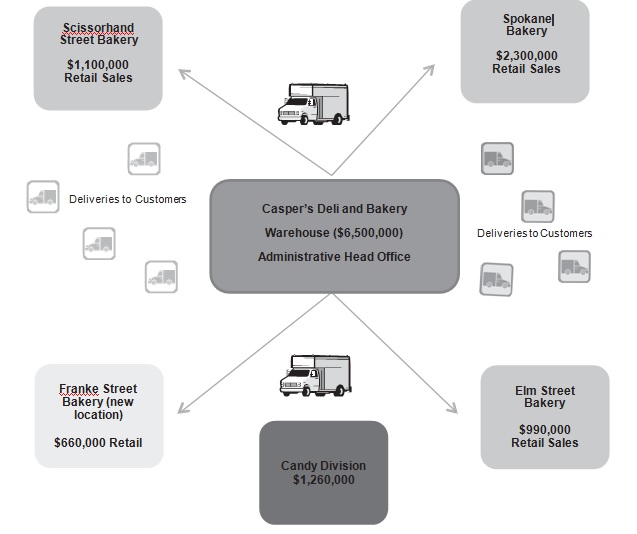