Would you write him a note saying you were there and that they were really potential clients?” What will you do? How will you do it? Why?

Aspects that should be addressed / included in your answer:

Individuals who score high on the knowing style tend to emphasize facts, details, and data. They seek clear and objective solutions to problems. They look for rationality, the validity of the data, and proof that the information being presented is accurate and credible. They focus on the underlying logic of the information and show a preference toward the data that creates legitimacy for their arguments. They are careful, slow to jump to conclusions, and precise in evaluating information, so decisions are usually not made quickly. They tend to prefer control in situations and to do things in the correct way. Hence they tend to be critical of unexpected or aberrant behavior. People with a knowing style are best at presenting a convincing argument based on evidence. They are problem solvers and decision makers who prefer to deal with technical tasks and straightforward, prescribed problems rather than social or interpersonal issues.

They excel at problems that have one correct answer. Multiple-choice exams are preferred over essay exams. Research has suggested that these individuals are inclined toward careers in technology, engineering, and law. In college, students with a knowing style tend to major in the physical sciences, engineering, law, and computers. In business, they tend to select careers in areas where numbers and data predominate (e.g., auditing, finance), and they prefer jobs that have a technical problem-solving emphasis (Kolb, Boyatzis, & Mainemelis, 2000; Cool & Van den Broeck, 2007).

Personal values are included here because they are “the core of the dynamics of behavior, and play so large a part in unifying personality” (All port, Gordon, & Vernon, 1931, p. 2).

Kohlberg’s model is the best known and most widely researched approach to values maturity. It focuses on the kind of reasoning used to reach a decision about an issue that has value or moral connotations.

The model consists of three major levels, each of which contains two stages. Table

1.2 summarizes the characteristics of each stage. In brief, the stages are sequential (for example, a person can’t progress to stage 3 before passing through stage 2), and each stage represents a higher level of maturity. 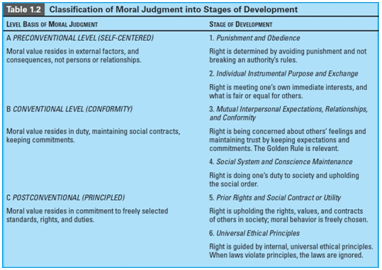 In the following discussion, we have chosen to use different terms that capture the dominant characteristics of each stage.

The first level of maturity, the self-centered level, includes the first two stages of values development. Moral reasoning and instrumental values are based on personal needs or wants and on the consequences of an act. For example, something could be judged as right or good if it helped an individual obtain a reward or avoid punishment and if the consequences were not negative for someone else. Stealing $50,000 is worse than stealing $500 in the self-centered level because the consequences (that is, the losses) are more negative for someone else.

The second level, or conformity level, includes stages 3 and 4. Moral reasoning is based on conforming to and upholding the conventions and expectations of society. This level is sometimes referred to as the “law and order” level because the emphasis is on conformity to laws and norms. Right and wrong are judged on the basis of whether or not behaviors conform to the rules of those in authority. Respect from others based on obedience is a prized outcome. Stealing $50,000 and stealing $500 is equally wrong in this level because both violate the law. Most American adults function at this level of values maturity.

The third is the principled level. It includes the final two stages of maturity and represents the most mature level of moral reasoning and the most mature set of instrumental values. Right and wrong are judged on the basis of the internalized principles of the individual. That is, judgments are made on the basis of a set of principles or core values that have been developed from individual experience. In the highest stage of maturity, this set of principles is comprehensive (it covers all contingencies), consistent (it is never violated), and universal (it does not change with the situation or circumstance). Thus, stealing $50,000 and stealing $500 are still judged to be wrong, but the basis for the judgment is not the violation of laws or rules; rather, it is the violation of a set of comprehensive, consistent, universal principles developed by the individual. Few individuals, according to Kohlberg, reach this highest level of maturity on a consistent basis. 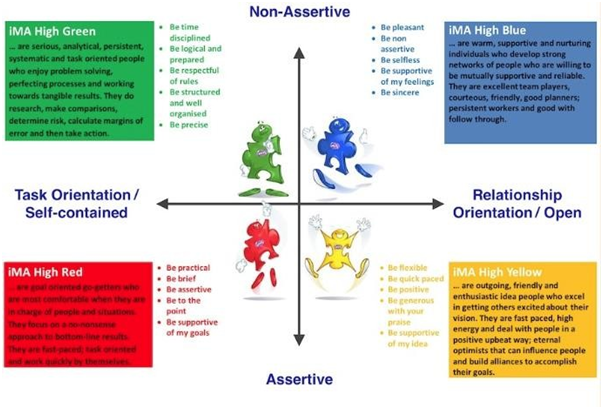