In an ever-changing world, we studied how a company like Disney and more especially the Walt Disney Parks and Resorts segment can grow and stay a leader in its industry.

These researches allowed us to define the critical point that makes Disney the reference in the amusement park industry: offer a unique, immersive and positive experience to each visitor through great storytelling that is continuously renewed.

If you want your own case study researched and written by us, place your order at Casestudyhelp.com.

Disney’s businesses flourish in different aspects of entertainment industries, its divisions include Walt Disney Parks and Resorts, Walt Disney Studios, Disney Media Networks, and Disney Consumer Products and Interactive Media. Despite their differences in operation, the core of these businesses is united, -Disney’s mission statement.

“The Walt Disney Company is to hold the position of one of the world’s top producers and providers of information with entertainment. Using the specific selection of brands to differentiate our content, assistance and customer products, we endeavor to develop the most artistic, innovative and successful entertainment experiences and relevant products in the world.”

These words, carefully chosen, summed up Disney’s vision as an entertainment tycoon. Everything that its business units carry out aim to realize Disney’s mission statement.

Case Study Help is endowed with a flourished team of 3000+ PhD level writers to assist in all sorts of strategy that are involved in Managerial economic assignments such as marketing, HR, finance, accounting, management statistics and other.

According to the financial report posted on Disney official website, people can know that Disney Company had invested in park and resorts more and more for R&D each year until now. As a result, it is apparent that they really put emphasis on Research and Development this part to meet this changing world.

The strategy of Human resource in Disney Park and Resorts is one of the factors that make them such success. They like to talk about the worst situation at first. Before job seekers applied the recruitment form, they were asked to see a video, which illustrates the company’s culture and practices. They have strict restrictions on clothing. They can’t even unveil their tattoo when they are working.

Well, to do all these researches and writing an excellent managerial economic case study or any other requires ample time, experience, creative skills, knowledge as well as potential to investigate study and make conclusions. Case Study Help is available not only with this but the following as well.

After doing an analysis on Disney Park and Resorts, we continue to look into this Walt Disney case with a critical eye. Using Porter’s five forces analysis, we studied what kind of external threats that Disney might have encountered, or would come across in the future. By understanding more about the industrial environment, the business is in, it helps the company to navigate its way towards sustainability and success.

The company also faces competition in China where they recently opened a new park in Shanghai. The threat of substitutes to amusement parks is relatively high; however, Disney has a strong brand and offers a unique experience making the visit to a park still attractive. Disney parks are moderately free of potential entrants as opening a park requires enormous capital. The bargaining power of suppliers is standard as there are only a handful of attraction makers, and switching may cost a lot of money. The visitors have low bargaining power as the entry ticket prices are fixed and cannot be negotiated. Finally, Disney Park and Resorts has many strengths, its future success will be determined by its ability to innovate and keep offering a unique experience to its visitors.

In 1996, Bill Gates, founder of Microsoft Corporation penned the phrase “content is king”. At the time, he was referring to the availability of information (data) over the internet, but his proclamation applied equally well to video programming delivered to television sets by cable and satellite providers. Households valued and were willing to pay to watch their favorite shows at the scheduled times; coverage of live events, particularly sports; and TV reruns and movies found by flipping the channels. But times changed. According to research firm Moffett Nathanson, in 2010, for the first time in history, pay-TV growth dropped below new household formation. 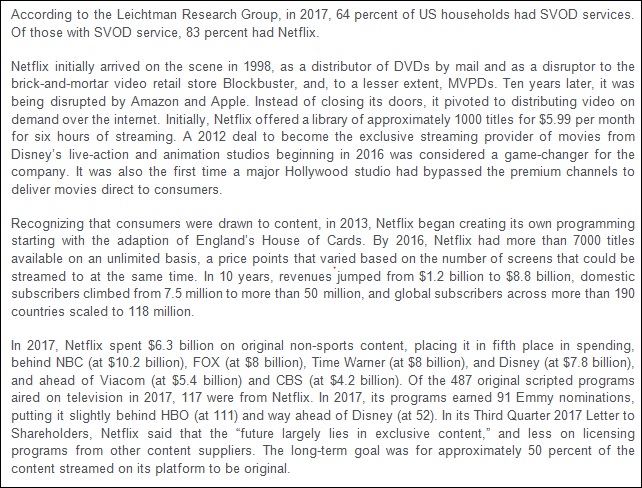 Disney is such an entertainment empire that it operates in many different industries: theme parks, studios, cable network, consumer merchandises, and etc. We looked at several SBUs that are more well-known to the general public, and discuss their positions on the BCG matrix, and what kind of synergies were produced.

The BCG matrix is associated with the life cycle of products. Signifying introduction, growth, maturity and decline, it represents Question marks, Stars, Cash cows and dogs in the BCG matrix respectively. With the help of the BCG matrix, we identified how organization cash resources were used to maximize Walt Disney future prospects and benefits. It gives the criteria for deciding which products or company one should invest in, own, harvest, or dispossess.

To move ahead with a well-researched conclusion, switch to our Case Study Writing Help now. Casestudyhelp.com is your destination to order all categories of case study help like nursing, law, and others. Also, we have many case study samples on legal case studies like construction and building, business laws and more. You can always refer to them if you need any help in writing a case study.

Facing a shift in preferences, new technology, and disruptive entrants, Disney needed to weigh a vast array of alternative strategies to sustain long-run profitability. Its content had been critical to the success of traditional MVPDs, Hulu, and Netflix. Should it exert its power as kingmaker to hasten or impede the demise of the traditional pay-TV bundle, where its content had resided for decades? Should it continue to navigate the relationship between partner and competitor with legacy media companies and well-financed tech firms? Or, should Disney push aside all gatekeepers and deliver its stories directly to consumers?