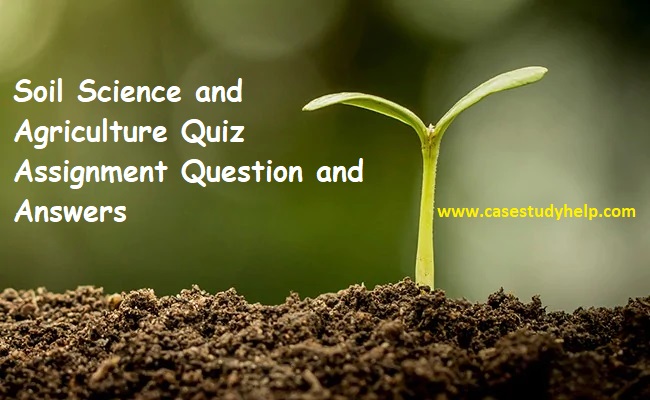 Answer all questions in each section.

c). Displaying equal amount of soil properties related to both horizons A and E

d). Displaying properties not similar to either A or E

7.  Which of the following soils has the highest mean annual soil temperature?

a). The silt fraction of the soil is made up of primarily secondary minerals

b). Sand and silt is derived mainly from the biogeochemical weathering of quartz

c). The clay portion of the soil results from the decomposition and reconstitution of the elements in the primary minerals

d). Organic matter is the most important component of soil texture

a). Water movement in the soil

b). Gas movement in the soil

c). Heat transfer in the soil

d). All the above are affected by soil structure

e). None of the above are affected by soil structure

The soil water potential that would be most affected by fertilizer application to the soil is …?

a). He needs to add more manure

b). He has to drain the liquid off the manure

c). Adding manure does not affect the texture

d). He should use poultry manure instead of cattle manure

b). There is an decrease in the percent macropores in the soil

True or False (1 point each)

Short answer. Show all steps in your calculations

Soil D was collected in Alaska and is classified as a Clam Gulch Silt Loam if it had 10% clay and the minimum amount of silt for that classification. Using the textural triangle provided fill-in the sand, silt, and clay percentages for Soil D.

37.  Calculate the bulk density for the following soils. Explain in a short paragraph possible reasons for the differences in bulk density of the three soils. (15 points)

A farmer from Wisconsin collect a soil sample from his pasture that had a weight of 830 g and a volume of 630 cm3. What is the bulk density of that soil?

The farmer from part (a) also collects some samples from his corn field that has been in continuous corn for the last 4 years. The sample from the corn field had a weight of 980 g. What is the bulk density of that soil in the corn field if the sample was collected using the same soil core?

The third sample collect by the farmer was from a separate part of his farm that has been in a corn-soybean-wheat rotation, with cover crop planted late summer of each of the corn & wheat years. If the sample was collected with a cylindrical core of diameter 6 cm and a height of 20 cm and the sample weight of 590 g, what is the bulk density of the soil in the crop rotation field?

38.  A student collected soil samples from two fields on the R.T. Wright farm using soil cores with the following dimensions: diameter = 6 cm and height of 13 cm. If both fields where established on Clarinda soil series, but were planted to different crops calculate the gravimetric and volumetric water content and % pore space in the samples collected using the information provided in the table below:

Using the information from your calculations for the table and from class discussion explain a) the difference in porosity and volumetric water content of the two samples; and b) how water movement into the soil would differ at the two sampling locations, although the soil type was the same for both samples. (15 points)

39.  Discuss how the soil profile will differ as you move down the slope. In your discussion explain how the topography interacts with the other factors of soil formation. (10 points)