When you think of a hospital, what comes to mind? Patients, emergency rooms, technology and medical advancements. Making the sick and injured well again. When officials at Virginia Mason think of hospitals, they think of cars. A car manufacturing plant, to be exact. Beginning in 2000 the hospital’s leaders looked at their infrastructure and saw it was designed around them, not the patient, said Dr. Gary Kaplan, Virginia Mason’s chairman and chief executive officer. F or example, you hurry up and be on time, only to wait for the physician to see you. They began looking for a better way to improve quality, safety and patient satisfaction. After two years of searching, they discovered the Toyota Production System, also known as lean manufacturing. Developed in part by Japanese businessman Taiichi Ohno, the idea is to eliminate waste and defects in production. Virginia Mason has tailored the Japanese model to fit health care. Kaplan and other Virginia Mason managers took their first trip to Japan in 2002 where they visited manufacturing plants such as Toyota and Yamaha.

Nearly 200 employees have toured plants in Japan and a ninth trip is planned for this summer. While Virginia Mason couldn’t say exactly how much they paid over the years to send the staff overseas, officials liken it to leadership training other companies pay for their employees.

They say the benefits offset the costs. “People are not cars’ is very common for me to hear,” Kaplan said. “We get so wrapped up in the seriousness and specialness of health care, but we also have to open our eyes to other industries—we’re way behind in information specialists and taking waste out of our process.

Toyota is obsessed with the customer and customer satisfaction … all those things Toyota was about was what we wanted.” So what does that mean? There are seven wastes, according to the production system. One is wasting time, such as patients waiting for a doctor or for test results to come back. Other are inventory waste- having more materials and information than is necessary and overproduction waste, producing more than is necessary.  Take, for example, stockpiling brochures and pamphlets is storage closets.

They take up space. There is wasted cost to make so many pamphlets that aren’t needed. The hospital and all of its campuses in the Seattle area implemented a Kanban system, which signals the need to restock Kanban, which means “visual card” in Japanese, uses exactly that—a card put near the bottom of a pile of tongue dispensers Gauze strips or brochures, for example. When a nurse or physician sees the card, he or she knows it’s time to refill. Supplies don’t run out, but they also aren’t over-ordered.

The hospital created standardized instrument trays for surgeries and procedures, which saved several hundred dollars by no longer setting out extra instruments no one used. Unused but opened instruments have to be thrown away. I t takes a series of simple steps to make improvements, said Janine Wentworth, an administrative director who returned from a two-week trip to Japan last month. One example is the development of a flip chart showing the level of mobility in physical therapy patients.

The chart shows the appropriate picture of what the patient can do and each nurse or physician who comes in the room doesn’t have to waste time searching charts or asking questions. Wentworth also wants to implement a production plan to hire more staff before a shortage exists based on turnover rates_ on any given hospital floor. Another adaptation from the Toyota model is a patient safety alert system. At the manufacturing plant, if there’s a problem, the whole line is stopped and the problem is fixed immediately.

Virginia Mason’s practice-had been to identify and fix problems after the fact, perhaps leading to mistakes recurring many times before a solution was found. The alert system allows nurses and physicians to signal a problem when it happens and fix it immediately. Virginia Mason’s Kirkland site has 10 alert each day. 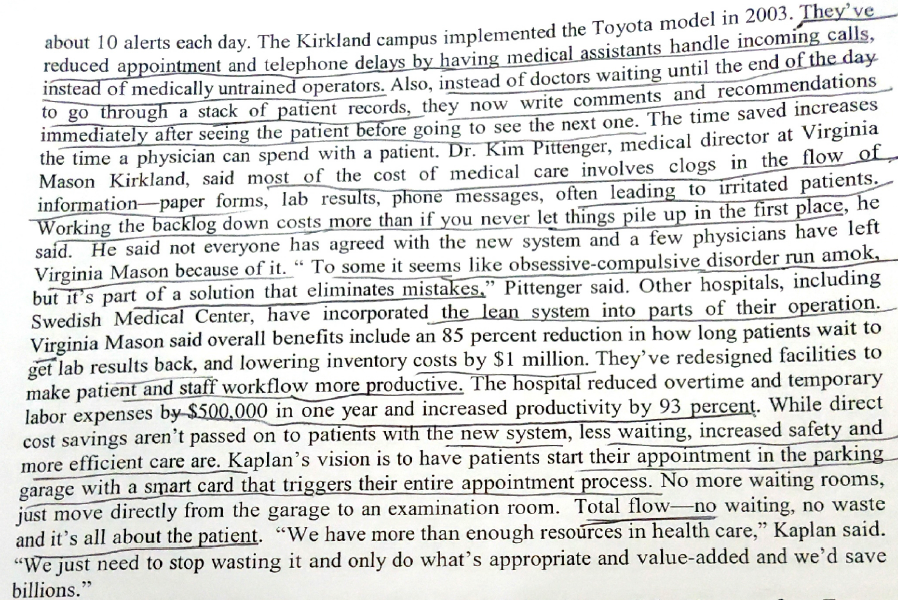 The Boeing Company, Headquartered in Chicago. Illinois is one of the two major producers of aircraft in the global market the other Major producer is European Airbus. Boeing products three models in Everett. Washington: 747s, 767s and 777s. The planes arc all produced in the same building. At any one time. There may be as many as six planes in various stages of production. Obviously the building has to be fairly large to accommodate such a huge undertaking.

In fact, the building is so largo that it covers over 95 acres and it is lout stories high, making it the largest building by volume in the world. It is so large that all of Disneyland would fit inside, and still leave about IS acres lot indoor parking! The windowless building has six huge doors along one side, each about 100 yards wide and 40 yard, high (the size of a football field)—large enough to allow a completed airplane to pass through. Boeing sells airplanes to airlines and countries around the globe.

There isn’t a set price for the planes: the actual mice depend on what features the customer wants. Once the details have been settled and an order submitted, the customer requirements are sent to the design department. Design Designers formerly had to construct a mock-up to determine the exact dimensions of the plane and to identify any assembly problems that might occur. That required time, materials, labor and space.

Now they use computers (CAD) to design airplanes, avoiding the cost of the mockups and shortening the development time. The production process once designs have been completed and approved by the customer. production of the plane Is scheduled, and parts and materials are ordered. Pans come to the plant by rail. Airplane, and truck, and are delivered to the major assembly area of the plane they vs ill be used for.

The parts are scheduled so they arrive at the plant just prior to when they will be used in assembly, and immediately moved to storage areas close to where they will be used. Time-phasing shipments to arrive as parts are needed helps to keep inventory investment loss- and avoids having to devote space to store parts that %semi be used immediately. There is a tradeoff though, because if any parts are missing or damaged and have to be reordered, that could cause production delays. When missing or defective pans are discovered, they are assigned priorities according to how critical the part is in terms of disruption of the flow of work.

The pans with the highest priorities are assigned to expediters who determine the best way to replace the pan. The expediters keep track of the progress of the parts and deliver them to the appropriate location as soon as they arrive. In the meantime, a portion of the work remains unfinished, awaiting the replacement pans, and workers complete other portions of the assembly. If the supplier is unable to replace the pan in a time frame that will not seriously delay assembly, as a last resort, Boeing has a machine shop that can make the necessary part.

The partially assembled portions of the plane, and in later stages, the plane itself, move from station to station as the work progresses staying about five days at each station. Giant overhead cranes are used to move large sections from one station to the next, although once the wheel assemblies have been installed, the plane is towed to the remaining stations. Finished planes are painted in one of two separate buildings. Painting usually adds 400 to 600 pounds to the weight of a plane.

The painting process involves giving the airplane a negative chaise and the paint a positive charge so that the pain! Will be attracted to the airplane. Testing and Quality Control Boeing has extensive quality control measures in place throughout the entire design and production process. Not only are there quality inspectors, individual employees inspect their own work and the work previously done by others on the plane. Buyers’ inspectors also check on the quality of the work. There are 60 test pilots who by the planes. Formerly planes were tested to evaluate their flight worthiness in a wind tunnel, which required expensive testing and added considerably to product development time. Now new designs arc tested using a computerized wind tunnel before production even begins, greatly reducing both time and cost. And in case you’re wondering, the wings arc fairly flexible: a typical wing can flap by as much as 22 feet before it will fracture. Re-engineering Boeing is Re-engineering its business systems. A top priority is to upgrade its computer systems. This will provide better links to suppliers, provide more up-to-date information for materials management, and enable company representatives who are at customer sites to create a customized aircraft design on their laptop computer. Another aspect of the re-engineering involves a shill to lean production. Key goals arc to reduce production time and reduce inventory.

Boeing wants to reduce the time that a plane spends at each workstation horn 5 days to 3 days, a reduction of 40 percent. Not only will that mean that customers can get their planes much sooner. it will also reduce labor costs and inventory costs, and improve cash flow. One part of this will be accomplished by moving toward late-stage customization, or delayed differentiation. That would mean standardizing the assembly of planes as long as possible before adding custom features. This, and other time-saving steps, will speed up production considerably, giving it a major competitive advantage. It also wants to reduce the tremendous amount of inventory it carries (a 747 jumbo jet has about 6 million pans, including 3 million rivets). One part of the plan is to have suppliers do more pre-delivery work by assembling the parts into kits that are delivered directly to the staging area where they will be installed on the aircraft instead of delivering separate pans to inventory. That would cut down on inventory carrying costs and save time. Boeing is also hoping to reduce the number of suppliers it has, and to establish better links and cooperation from suppliers. Currently Boeing has about 3,500 suppliers. Compare that with GM’s roughly 2,500 suppliers, and you get an idea of how large this number is.